A Gulf War Experience: A Genuine Account of a Veteran’s Positive Experience with the WRIISC 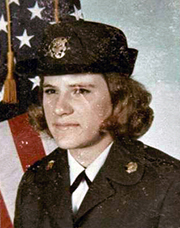 Penny Deere like many Veterans was drawn to the Military as she explored opportunities for a better way of life. Born and raised in a country setting in upstate New York, she had little interest in college but held a strong desire and tenacity in her search for “something better.” Aligning her spirit with her military options, she advanced into a career as Army Military Intelligence.

Penny enjoyed a 15-year military career before deployment. She had an active, well-adjusted life in the military. “I was a social butterfly. A take-charge type of girl. In the military, I was always the one planning events making people happy. I was in top physical condition, skiing, bowling, and I was a sole parent.” To herself and others, Penny appeared as if she could do it all.

But then life seemed to change. In 1989, she was stationed in Germany, around the time of the fall of the Berlin Wall. “I watched the Soviets disassemble. In 1990, preparing for deployment in Iraq, I had an experience with military sexual trauma (MST).” Deployment in Iraq meant she had to deal both with the physical and emotional climate of a combat zone as well as the fear of reoccurrence of MST. “These were terrible conditions. It was desolate. Sand storms were everywhere. Laundry would be done almost needlessly because a sand storm would develop and get into everything. There weren’t any good showers. All of these things disturb your psyche.”

From November 1990 through May 1991, after six months of deployment in Saudi Arabia, Penny returned to Germany in somewhat of a depressed state. “After Germany, I was then stationed in New Jersey and depression continued to manifest itself. I was drinking a lot and was having trouble adjusting. My troops told me things I did and I had no idea. I knew I needed to clean up my act and gain control. Making a conscious effort to stop drinking, I went to my first sergeant to create a plan and figure out what I had to do. I sought Alcoholics Anonymous and military track programs because I didn’t want to drink myself to death.” Since retiring in 1995, Penny Joyce has remained sober for 13 years.

Reunited with her family, she began readjustment to civilian life. But little did she know things were festering. She described her physical and emotional turmoil, “One minute I could be fine then I’m not fine. I was a poster child for Gulf War syndrome. All this stuff affects your daily life. I had fatigue, GI problems (gastroesophageal reflux disease (GERD)), a foggy brain, nightmares, pain all over, depression, anxiety, and post traumatic stress disorder (PTSD). I tried to get help. It was incapacitating.” She began looking for answers and doing a lot of research. “I heard about the WRIISC and saw a flyer. My home VA didn’t have answers for me. Although, my primary care provider was very supportive and placed a consult for the WRIISC.”

Penny was pleased by her evaluation at the WRIISC. “I had a whole team to myself. The WRIISC staff dedicated themselves to me. Before the WRIISC, I didn’t realize I needed to be validated. I felt the team listened to me.” Having the entire WRIISC clinical team meet with her at one time was especially important. “At the end, everybody got together and gave me a roadmap and this was the most useful part.” Through her WRIISC visit, Penny was able to learn different coping skills; “My problems are still there but I am better able to deal with them. The WRIISC opened the flood gates to many things that are happening for me today.” 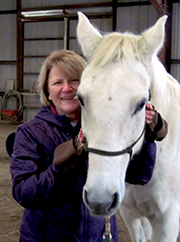 Since her visit to the WRIISC, Penny has taken steps to implement many of the recommendations given to her. The recommendation for a sleep study resulted in finding out she has sleep apnea. Her sleep is improved as a result of practicing the recommended integrative and complementary medicine practices such as yoga, guided imagery, and deep breathing. Speech pathology is a service offered at VA to support verbal and nonverbal communication. This service recommendation has increased her productivity; instruction and use of devices has enabled her to be more organized. Working with a mental health therapist has also helped her to better understand how to deal with social triggers which has enabled her to better cope with her MST and manage her anxiety.

Self-management is a term used to describe what each individual can do to improve their overall health. It includes taking charge of your own health through positive behaviors such as exercise, eating healthy and engaging in relaxation strategies. Penny Deere stands out as a noteworthy story to feature in our newsletter. She exemplifies how these strategies can benefit your overall well-being. To her credit, she has been featured in many newspaper articles in her hometown. Additionally, her story was captured as one of the main characters in a play about women Veterans. To further her engagement, Penny has taken creative writing and photography classes. We are proud to share that Penny credits her WRIISC visit for many of these new attributes.

Get help from Veterans Crisis Line

If you are in crisis or having thoughts of suicide, visit VeteransCrisisLine.net for more resources.